Since Google announced the indexing (ranking) of passages, many assumed that they would look different in the search results. But no, according to Google's Danny Sullivan, they won't look any different. Danny told me on Twitter that indexing passages "doesn't change how the results look".

Why did some of us, including myself, at some point think that the results based on indexing passages would look different? Well, the original Google announcement shared this screenshot of what it will look like: 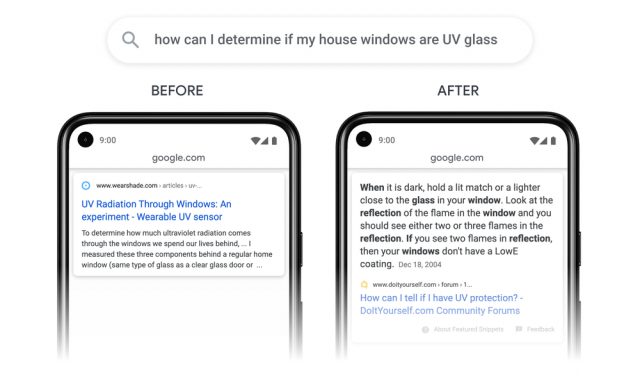 So Google put it with the words: "With new functions for understanding passages, Google can understand that the specific passage (R) is much more relevant to a particular query than a broader page on the same topic (L)."

I asked Danny about it and he said, "This is a bad illustration because it compares a regular snippet to a featured snippet. Any regular listing that is currently becoming a featured snippet – with no passage ranking – looks like this."

In short, indexing passages is all about ranking. It will not look or look different, it will only rate pages that were not previously rated by Google, as Google can understand content better than the content of longer web pages. And no, the indexing of passages is not live yet and probably won't be in 2020.

Here is the stream of tweets about how indexing passages in the search results interface doesn't look or feel any different than normal snippets:

Will the passage indexing ranking snippets look different from the normal snippets?

Why should they It's like asking if the link analysis results look different. Or if the BERT analysis looks different. It's just another ranking factor. The appearance of the results does not change.

Yes I can understand that. Not the best way for us to illustrate. Well, for ordinary people, it was probably fine. For SEOs, I can see and understand that they are seeing a difference in the ad and interpreting it in a way that we were not intended to.

The passage ranking has nothing to do with the ad. It's just another ranking mechanism that we use to identify pages that are most relevant to a search.

For granular control of the ad, use the nosnippet that started the whole discussion. It's very detailed: https://t.co/v3msKJMQGC

With nosnippet you can choose to only show a single word if that's what you want. Or just certain words. We'll continue to * index * the entire page to understand if it's relevant to view it, but we wouldn't be displaying things marked as nosnippet.

For this reason, the nosnippet tag has no effect on the results of the passage indexing.

As you know, there has also been some speculation about the scroll to text and highlighting feature we see on featured snippets. This would be a good place to work on indexing passages. Yes, we know it's all about ranking. However, when Google shows a result and links the searcher to a page with a large amount of content, it makes sense that the searcher is anchored in the right place on the page. This is how Danny answered this question:

I mean, I think you only use this feature for featured snippets. When you click on a FS it can anchor you and highlight the FS resource portion on this webpage. It can be useful to do this with the indexing of passages if these pages are very long.

We already have systems in place for determining what is best * displayed * so that users understand how a page can be relevant to their search. Maybe (or maybe not) we'll do in-page jumping like we did with featured snippets, but that's not part of the passage ranking.

And to be very clear, Danny has been saying this for over two months:

It won't look any different. This is just one way to better identify web pages that are relevant to a query. How do we show relevant pages now? Still the same when we show a page based on improved ranking technology.

5 of the most effective scholar blogs about life, cash, and...

How To Make Cash With Pictures Inventory Photographs

How content material can promote advertising and marketing success in lean...