A few months ago, Facebook announced a $ 100 million grant program to help SMEs. Shortly thereafter, Facebook Shops were launched to help them sell online. Today, the social media giant is building on that effort and introducing a new product to monetize classes and online events known simply as "Paid Online Events". At launch, the option will be available in 20 countries for sites that meet its partner monetization policy.

The growing role of broadcasts

In June, Pages doubled live broadcasts on Facebook compared to the same period last year, mainly due to an increase in broadcasts since March and the COVID-19 outbreak.

In response to this trend, the platform is deploying additional resources to enable businesses and developers to monetize the events they had to move to digital. With a new update, business owners can now create the event, set the price, promote the event, collect payment and host the event themselves from one location.

"With social distancing mandates still in place, many companies and developers are putting their events and services online to connect with existing customers and reach new customers," said the head of the Facebook app Fidji Simo. "People also rely more on live video and interactive experiences when they can't physically get together." With much of the country still grappling with closings of music venues, event spaces, and other venues for public gatherings, the app seeks to fill a significant void for SMBs and other marketers in need of alternative revenue options.

It's important to note that the offering meets the end-to-end needs of a local business that includes marketing, payment, and live video. You create drive engagement through organic or paid advertising and can then create custom audiences of event or course participants. For paid online events, organizers receive monthly payouts after exceeding a minimum threshold of $ 100.

How does the payment actually work? With the new option, companies and developers can bill for access to their online events directly on Facebook. In the snapshot below, users tap the Purchase Access button and are instantly guided through the in-stream payment process, which is facilitated by their in-app settings. 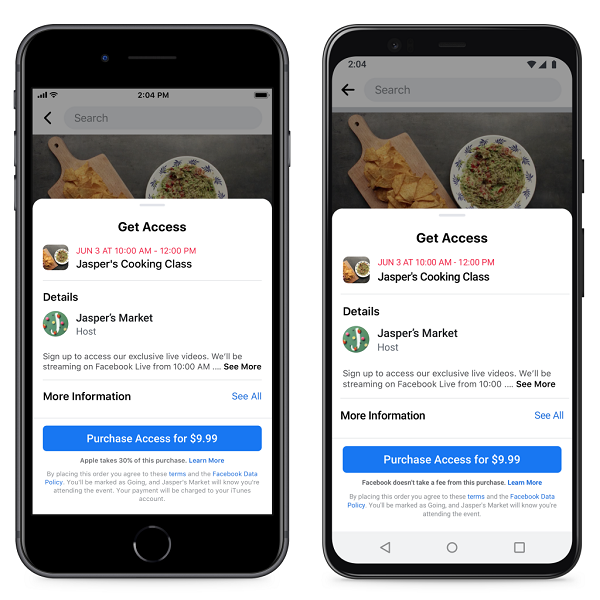 Early user events included lectures, trivia, podcast recordings, boxing matches, cooking classes, meet-and-greets, and fitness classes. Meanwhile, Facebook also revealed tests of the ability to hold smaller, more interactive gatherings in Messenger Rooms. The company also hinted that it would soon offer brands and developers the ability to tag products from their Facebook store or catalog before they go live. These products are shown at the end of the video so users can easily tap on them to learn more and buy.

No fees for one year

Facebook has promised to stop charging for paid online events for at least the next year. In addition, transactions completed on the Internet and on Android in countries where the Facebook platform launched Pay, SMBs and creators keep 100% of the income they generate from paid online events. While Google agreed to waive the fees for Android devices, Apple decided to stick to its normal 30 percent commission for the App Store, creating tension as Facebook tries to break the tech space at this uncertain time Unite business support.

According to Simo, Apple was also offered the option to use Facebook Pay to allow the platform to absorb the additional costs. However, this was also rejected. "Unfortunately, they both rejected our inquiries and SMEs only receive 70 percent of their hard-earned sales."

Whether the adoption of paid events will turn into a long-term, viable business solution remains to be seen, but in the present it offers relief at a time when many businesses continue to take a hit as a result of the pandemic. It's also a win for Facebook – largely because it can showcase its live streaming and video capabilities.

Google's handle change device is a toggle, not a progress examine

How one can create Fb video advertisements

The Who, What, Why and How Behind Higher Advertising and marketing...