I was on the verge of wondering whether or not I should report some of the chatters and signals I see related to a possible update to the Google search ranking algorithm. I've seen some small signs since the weekend of an update, but those signs will pick up a bit more in a few days.

So I figured I'd document and share what I've seen so far. Some people have asked me if there is an update this weekend. I don't think there was a major update, maybe something that affected certain niches or tactics, but nothing as common as a core update.

The last unconfirmed update I reported on was on February 17th and of course all the confusion about the ranking of the passages and when it was released.

But from the weekend, both WebmasterWorld and BlackHatWorld were talking about another update this weekend. Here's some of that chatter:

How is your USA traffic? The traffic on my homepage is down 65% today at 11:30 am … USA down 41% overall, however my UK traffic along with AU and CA is up 60%. Indeed, it seems that traffic is now being choked hour by hour. Traffic in the US might increase later in the day, but whatever that change is, I've lost a significant amount of traffic and customers since the 8th. It might or not be passage indexing, only time will tell. Traffic has died out completely today. It is as if everyone suddenly disappeared from the surface of this planet and went elsewhere. This Google update (yes, I call it an update because it really is) is like Lindsay Lohan on meth … very unpredictable and highly destructive. The traffic is now throttled by the hour. Yesterday I started with an increase in UK traffic and a sharp decrease in the US. At the end of the day, UK traffic was also down, with Canada falling 50%. Today US / CA / AU traffic has increased but the UK has increased 57%. Every day different and even like a stone from hour to hour. Has anyone else seen that? Has anyone seen anything this weekend? I have 2 websites, one was restored with the December core update and one was hit. I am now seeing a complete reversal of the sites for the weekend, the one that was restored was hit hard and the one that was hit was back in the pre-December rankings. The one hit again is really weird, the dreaded filter really crashes it, it is actively pushing it down for some reason, 1 KW went from page 5-6 to page 14, most of the other rates fell by 3-6 I've been seeing some position moves since Sunday. Some positions go up and some go down. It looks like another random update is on the way. Apparently there is another update. I've lost more than 70% of my traffic since Sunday. Yes, I expected people to write now. My main website is dancing like crazy. Lost 40 keywords on Sunday – 40 keywords today, completely random. My traffic yesterday even increased by a good 30% compared to last month. I'm not sure what will happen today, but yesterday was more comparable to the pre-January update. I've actually been busy so I've made very few changes to this one site in the past 5 to 6 weeks.

Some of the tracking tools have some variations, but the tools aren't 100% in sync with each other. 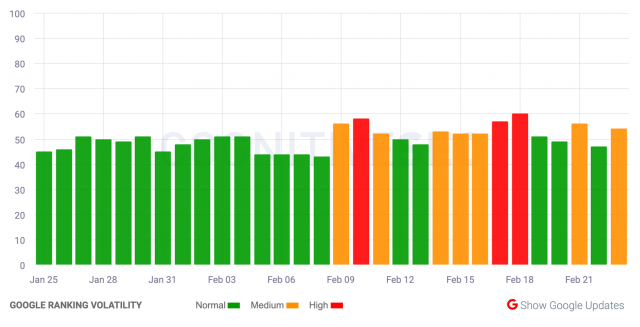 So if you've seen some changes since the weekend, you are not alone.

Forum discussion at WebmasterWorld and BlackHatWorld.

Tips on how to Create a Profitable TikTok Advertising and marketing...

The 25 finest social media motion pictures so as to add...

How neuroscience can enhance social media efforts and construct fandoms