We're bringing back this slightly off-the-shelf whiteboard Friday, where the fantastic Will Critchlow draws lessons from the search for children. Children may search differently than adults, but there are some interesting insights into how they use Google that can help deepen our understanding of seekers in general. Comfort levels with specific search strategies, just read the bold words, use search suggestions and related queries as answers – there is a lot to research. 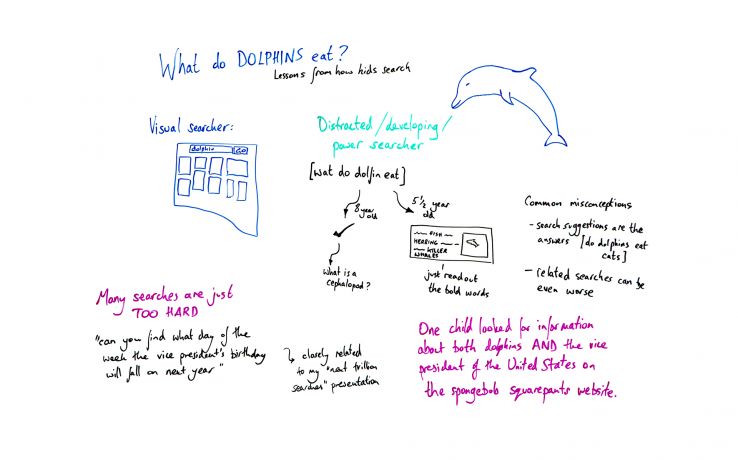 Click on the whiteboard image above to open a high resolution version in a new tab!

Hello everybody. I'm Will Critchlow, founder and CEO of Distilled, and Whiteboard Friday this week is a little different. I want to talk about some surprising and interesting, and some fun facts that I learned from reading Google's research into how children search for information. So this is not really feasible. This isn't about tactics to improve your website. But I think we get some insight – they studied children ages 7 to 11 – by looking at how children treat each other. We can see some considerations or ideas about how there could be some misunderstandings about how adults are looking. So let's go into that.

What do dolphins eat?

I got this "What do dolphins eat?" because this was the first question the researchers asked the kids to say, sit in front of a search box, go. They tell this little anecdote, a little soul-shattering, that it was a seven-year-old kid who started typing dolphin, DOLF, and then hit enter, and it was like there weren't any dolphins who hopefully they found him a couple of dolphins. But many children have successfully mastered this task.

The researchers divided the children's approach into different categories. They found that some children were seekers of power. Some called it "developing". They classified some as "distracted". But one thing that fascinated me was what they called visual viewfinders. I think they found this more often among the younger children, who might be a little less confident in reading and writing. It turns out that with almost every question you asked them, these children first turn to image searching. 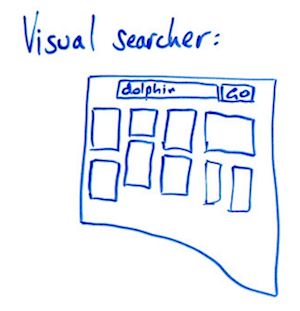 For this particular question, they went to image search, usually just typed "dolphin" and then scrolled and looked for images of a dolphin eating something. Then they would find a dolphin eating a fish and they would turn to the researcher and say, "Look, dolphins eat fish." Which I like a lot when you think about it in a time of fake news. These are the children who do primary research. You go straight to the primary source. But I never would have really thought about it and I don't know if you would. But hopefully this kind of thought will trigger some thoughts and some insights and discussions at your end. They found that there were some children who pretty much always looked for pictures no matter what you asked them.

Children who were a bit more advanced and could read and write a little more safely often fell into one of these camps, in which they hopefully focused their attention. They found that many children were obviously distracted, and I think we can relate to them as adults. Many of the children were not really interested in the task at hand. But this kind of path from being distracted to developing into a power seeker is an interesting journey, which in my opinion also applies to adults.

In practice: [eat Wat Do Dolfin] 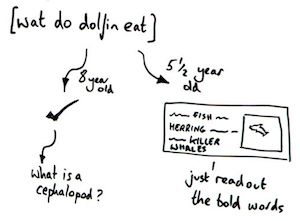 After reading this paper, I actually went out and did some research on my children. So my children were roughly in this age group. When I did, my daughter was eight and my son five and a half years old. Interestingly, both typed pretty much "wat do dolfin eat". Both misspelled "what" and both misspelled "dolphin". Google agreed to this. Obviously nowadays this is close enough to achieve the desired result. Both answered the question fairly successfully, but both went straight to the OneBox. Again, this is probably not surprising. You can imagine that most people are probably looking that way.

"Oh, what is a cephalopod?" The way to develop from distracted

So there is a OneBox that shows up and contains a picture of a dolphin. My daughter, a very confident reader, loves to read: "What does Dolfin eat?" She sat and read the OneBox. Then she turned to me and said, "They say they eat fish and herring. Oh, what is a cephalopod?" I think that was what probably distracted her from developing. At first, she only answered this question because I asked her to. But then she saw a word she didn't know and suddenly she was curious. She had to type it carefully because it is a bit tricky word to spell it. But she was looking for a cephalopod, and you could see the engagement of "I'm writing this because Dad asked me and it's a little bit interesting, I think" too "huh, I don't know what" cephalopod, and now I'm doing my own research for my own reasons. "So that was interesting.

My son typed something similar, as I said, and he was able to read safely at the time he did so, but generally read aloud and a little quiet. The fascinating thing was that he only read the bold words. He read it out loud and he didn't read the OneBox. He only read the bold words. So he said to me: "Dolphins eat fish, herring, killer whales" because killer whales were brave for some reason. I think it was about talking about what dolphins eat, what killer whales eat, and he didn't read the context. That drove him crazy. So he found that ridiculous and isn't it funny that Google thinks dolphins eat killer whales.

This is similar to some of the things that occurred in the original research where there were a number of common misunderstandings. It turns out that children and I bet that some have adults. Most adults probably don't believe the bold words in the OneBox are the list of answers, but it points to the problems with fact-based, truthful queries that Google is asked to be the arbiter of truth for some of them this stuff. We will not go into this too deeply.

Common misunderstandings for children when searching 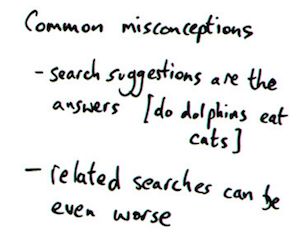 But some common misunderstandings that some children found were that the search suggestions, i.e. the drop-down menu when typing, were the answers, which is a bit problematic. I mean, we've all seen racist or hateful dropdowns in these searches. But in this particular case, it was mostly just funny. It would end up like you start asking, "What do dolphins eat?" And it would be as if "Eating Dolphins Cats" was one of the search suggestions.

The same applies to related searches, which are known to be no answer to the question. These are other questions. But especially children – I mean, I think that applies to all users – didn't necessarily read the instructions on the page, didn't read that they were related searches, but only saw those things that said a lot of "dolphin" and started reading them out. So that was interesting.

How children look for complicated questions

The next part of the research was much more complex. So they started with these simple questions and got into much more difficult questions. One of them they asked was this one, which is really quite difficult. So the question was, "Can you find out which day of the week the Vice President's birthday will fall next year?" This is a multifaceted, multi-part question.

How do you deal with complex, multi-level queries?

Most of the younger children were rather baffled on this question. Some did it. I think a lot of adults would fail because of that. So if you just turn to Google, just type it in, or do a voice search, Google is almost on the verge of doing so. If you have something like "When is the Vice President's birthday?" Said, this is a question that Google can possibly only answer. But this kind of three-shift thing, which day of the week and next year, actually makes this a very difficult question. So the children first had to find out that this wasn't a single question to answer. They had to do several levels of research. When is the Vice President's Birthday? What day of the week is this date next year? Work through it this way.

I found with my children that my eight-year-old daughter was stuck halfway. Somehow she realized that she would not get there in one step, but could not structure the multi-level levels entirely, but was also somewhat distracted. It wasn't about cephalopods anymore, so she wasn't quite as interested.

I think this is a whole area where Google's ability to answer more complex queries is evolving and we are beginning to trust and learn that these types of queries can be answered. We see that the search volume will increase and increase in new areas. So I'm going to link to a post I wrote about a presentation I made over the next trillion searches. This is my hypothesis that there are essentially very broad brush strokes, there are a trillion desktop searches a year. There are a trillion mobile searches every year. There are still a trillion searches that we are not yet performing because they cannot be answered well. I have some data to back it up, and some arguments as to why I think it's about this size. But I think that is closely related to things where children get stuck on such questions.

Incidentally, I would encourage you to try this. It is quite interesting because while you are trying to get the answer you will find search results that seem to give the answer. For example, I think there was an About.com page that was supposed to give the answer. It said, "What day of the week is the Vice President's birthday?" But it was written a year earlier and there was no date on the page. So it was actually wrong. It was called Thursday. That was the answer in 2016 or 2017. This again points out the difference between primary research, the difference between answering a question and the truth. I think a lot of philosophical questions are branded there.

Children familiarize themselves with the search – even if it is wrong

So we're going to end with my possibly favorite anecdote of user research these guys did. They said that some of these children, somewhere in this stage of development, are very tied to searching in a certain way. I think it's kind of related to the visual search. You will find something that works for you. It works once. They become familiar with it, they know it and they just do it for everything, whether it is appropriate or not. My favorite example was this one child who appeared to be looking for information about dolphins and the Vice President of the United States on the SpongeBob SquarePants website. I mean, maybe it works for dolphins, but I suspect there isn't much of VP information.

I hope you enjoyed this little adventure in finding children and maybe some things we can learn from it. Write some of your own anecdotes in the comments. I would love to hear your experiences and some of the fun things you learned along the way. Watch out.

To help us serve you better, please consider those 2020 Moz Blog Reader survey, which asks you who you are, what challenges you face, and what you'd like to see in the Moz Blog.

Market Your Enterprise Throughout Occasions of Uncertainty

Eight Methods To Make Cash As A Content material Creator

Eight Suggestions for Setting Up a House Pictures Studio – Weblog...

13 Methods To Make Cash From Grocery, Bundle And Extra Supply